“‘A small kind of miracle’: Affirmations of Urban Indigeneity in Tommy Orange’s There There.”

* To have been presented at the Native American and Indigenous Studies Association Annual Conference; Toronto, Ontario, May, 2020 (conference canceled because of coronavirus) 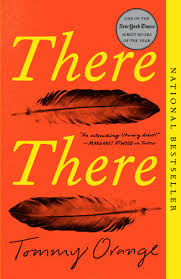 How is it, I ask, that Tommy Orange’s novel There There (2018) responds to, as he puts it in the novel’s opening chapter, the “double bind” of “Indigenous art”: “If [such art] isn’t pulling from tradition, how is it Indigenous? And if it is stuck in tradition, in the past, how can it be relevant to other Indigenous people living now, how can it be modern? So to get close to but keep enough distance from tradition, in order to be recognizably Native and modern-sounding, is a small kind of miracle […].” I focus here on Orange’s representation of characters who, characteristically, worry over their own cultural authenticity but nevertheless manage to assert distinctively Indigenous identities as they adopt and adapt a range of non-Indigenous ideas and practices. Such assertions draw from and depend upon, Orange implies, the creative refashioning inherent in oral storytelling practices themselves, and thus achieve a “small kind of miracle” in their negotiation and balancing of the traditional and the modern. The novel’s representations of “survivance” largely align Orange, I contend, with the cosmopolitan theories of Gerald Vizenor, who similarly affirms possibilities for flexible, innovative, vital reconstructions of traditional Indigeneity in urban environments.

Presented at Association for the Study of Literature and the Environment (ASLE) annual conference; Davis, California, June 2019 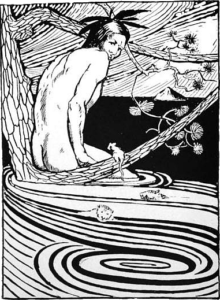 Vizenor’s writing has frequently invoked and reinterpreted the Naanabozho figure in order to highlight Anishinaabe values and reflect on their status in the contemporary moment. Traditional ecological commitments might indeed be retained, Vizenor’s work insists, in specific kinds of creative refashioning. In other words, humans might rediscover the eunomic interpenetration and interdependence of the human and nonhuman, and be nourished by the healing powers of the earth itself, without utterly rejecting Western technocracy (especially by attempting to approximate – as Vizenor claims so-called “tradition fascists” have done – some idealized, static conception of authentic Indigenous life). This “mixedblood,” “crossblood,” or Métis perspective, as he dubs it, offers extraordinary possibilities for resisting Euro America’s dysnomic legacy. Human artifice and the natural world – technological prosthetic and nonhuman being – are not, in such expressions of “survivance,” philosophically or spiritually opposed or finally incongruent. In the comic work of a modern Naanabozho, they form a liberating harmony.

“Continents of Liberty: Emerson and Gerald Vizenor’s Chair of Tears”

“Vizenor’s deployment of Emerson here appears much more complicated than a simple avowal of affinity and respect. It is, in fact, illuminating to read Chair of Tears as a profound critique of Emerson (who would save the Cherokee people, but not as Cherokees) and a radical revision of his exuberant assertions in Nature of a gigantic, effectively deified self that might fully comprehend and subordinate its environment. This Euro-American version of autonomy is, Vizenor’s work implies, not only blind to the actual relations 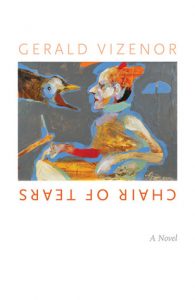 between humans and the rest of creation, but also implicated – as an informing principle of settler culture – in an enduring tyranny over Indigenous peoples. Against Emerson’s vision of a masterful self capable of comprehensively seeing, identifying with, and finally exploiting a fixed divine order beyond the flux of Nature, Vizenor proffers an Indigenous alternative that insists on the self’s systemic exposure to mutability and chance, its humility before an animate but finally unruly natural world, and its fundamental interconnection with an interplay of other selves as well as non-human presences.”

“Something to be done: The Road, Beckett, and American autonomy”

“Against Beckett’s interminable bleakness, religious skepticism, and anti-progressive attitude – ostensibly ‘unAmerican’ in their defeatism – McCarthy proffers, I suggest, a distinctive alternative rooted in seminal national mythoi. In place of characters who cannot change and go forward, who are trapped in

repetitions or downward spirals, who demand a God and cannot find Him, who hope and are damned for hoping, who would love but can find no suitable object, The Road presents a father and son who manage to move and get somewhere (however precarious that somewhere might be), propelled by mutual devotion and a potent sense of the sacred ‘fire’ they carry within them. McCarthy would affirm, in this turn away from Beckett’s emphasis on the loveless, tortu(r)ous isolation of the self, the plausibility of radical personal autonomy, self-authorizing in its holy rituals, dynamic in translating its convictions into action, and – most hyperbolically – capable of sustaining belief in divine and human love even in the absence of a vital human community or natural environment.”

“Vizenor posits, against the Euro-American emphasis on personal autonomy, isolate selfhood, and the regulative power of human law, an indigenous alternative favoring communal autonomy, inter-relational selfhood, and recognition of a pre-eminent divine law unassimilable to the human will. Whereas in DeLillo’s Cosmopolis we reach the threshold of autonomy’s complete conceptual disintegration,  as the auto- in auto-nomia weakens and finally dissolves with the self’s profound implication in technological prosthetics and the fluidity of self-constructions this makes possible, Vizenor reconstitutes the self as a potentially thriving entity linked to a network of both divine and human presences.”

“Ecology and Autonomy: Louise Erdrich’s The Plague of Doves”

Presented at the American Literature Association’s Annual Conference, Boston, May, 2013

“For Erdrich’s Judge Coutts, human presumptions of mastery over Nature perilously ignore an overarching and underlying divine law, never to be claimed by any individual, which always subordinates the human within a fragile and finally unpredictable network of animate beings. Coutts emphasizes the primacy of chance in this world, and the vanity of thinking that any human law, let alone the self-law of isolate individuals, could be the source of something stable and eternal. The divisions insisted upon by Euro-American philosophical traditions – between any human ‘individuals,’ or between humans and animals – make promises, in other words, that they do not keep. The insight seems to emerge for Coutts out of his understanding of traditional Ojibwa religion, as well as his acute awareness of the historical vulnerability of Native Americans, from Columbus on down, to exploitative applications of an abstract and deceptively contingent human law.”

“‘Murder Everywhere’: Whitman, Lish, and the Fate of Self-Celebration”

“The distinction between ‘fame’ and ‘celebrity’ is of key relevance to Dear Mr. Capote, I insist, for the novel explores the contemporary conditions of manufactured renown, and the pathological growth of efforts to celebrate the self since their early development in Whitman’s day. As Davie knows, the commodified products of mass celebration need not be affiliated with meritorious deeds, and do not require fame, though they

may benefit from it, as a prerequisite. In Lish’s (and our) America, nearly anything – even, perhaps especially, serial killing – can be ‘celebrated,’ while a general uncertainty prevails about any form of renown that has not been made vulnerable to human manipulation, to corporatizing, to commodification (hence the confusion, in the popular imagination as well as much critical commentary, of the terms ‘fame’ and ‘celebrity’). The machinery of celebration has been opened to the mass, and it is within that opening that Davie appears.“

Presented at the Canadian Association for American Studies conference, Toronto, Geographies of Promise and Betrayal, October, 2012

“McCarthy’s The Road does indeed, as George Monbiot has famously claimed, help us ‘[imagine] a world without a biosphere,’ and thus vividly brings to mind the stakes involved in our own abuse of what sustains us. We might plausibly discover here, moreover, a critique of capitalist rapacity and its contribution to universal desolation in the narrative’s description of roving bands of cannibals, and a compelling portrait of this (and perhaps our) world’s ultimate desideratum in its compassionate young boy, whose other-directed instinct – mindful of concerns beyond the isolate and all-consuming self – shines humbly through the moral darkness.

And yet, an important and overlooked dimension of The Road’s popularity is, surely, the way it affirms, however ambivalently, an American religious faith with a specific, conventional, and dubiously ‘environmental’ content. The novel’s heroic father, on whom his son depends for everything, provides a compelling model of faith in the possibility of an effectively deified self, ruggedly and dynamically autonomous, capable in fact of enduring even when the biosphere in which it is ‘environed’ has effectively been destroyed. What is ‘mobilized at the level of feeling’ in the father’s efforts to deliver his son to safety is, at last, an endorsement of the sacred possibilities of self-law.”

“The ‘end of America’ represented in SSTLS ultimately proffers, I suggest, a profound consideration of the contemporary, corrupted status of seminal mythologies of the self and the nation – among the most familiar of them, American exceptionalism, Manifest Destiny, so-called ‘regeneration through violence,’ and the effectively deified, autonomous self bequeathed us by the Transcendentalists. What Shteyngart charts here, in fact, is the apocalyptic transformation of America from its originary status as a pastoral paradise, to a gothic dystopia – that is, from a place where the autonomous individual’s proximity to Nature yields a privileged and exalting access to the divine, allowing the full realization of human potential, to one where Nature seems all but wholly appropriated by the human, and individual autonomy has come to seem like a terminally isolating phenomenon which pits vampiric post-humans against one another.”

“Between Mailer and DeLillo: The ‘affectless type’ in Robert Stone’s A Hall of Mirrors”

“The pointless destruction caused by Gilkey and related figures in Underworld suggests a revision of Slotkin’s classic formula of American mythology: not regeneration through violence, but rather the regeneration of violence through repetition. In the work of DeLillo, as in Stone, Mailer’s liberating psychopathy is, decisively, no liberation at all. Rheinhardt’s peculiar boast is that he can adapt to the purported cultural cold by devolving, ‘turn back into an amphibian while you wait and disappear in a flurry of fins’ (Stone 147). The rhetoric of natural evolution is splendidly ironic, however, for it is machinal and simulative forms, rather than authentic human ones, which come to define Stone’s disaffected protagonist. By the novel’s end, this survivor of wintry environments has devolved into mass technology’s cold steel.”

“Medical accounts of the absence of conscience are particularly intriguing, however, for the way they seem exceptionally disposed to drift away from the ideal of scientific objectivity and toward something like its opposite – that is, evaluations with a markedly subjective flavor, which often seem to read like, or at least heavily depend upon, fictional representations of the subject. Lombroso furnishes the classic early example: explaining what he took to be the discovery of the born criminal’s distinctively shaped head, he turned to lurid conventions familiar enough to readers of Gothic literature: ‘At the sight of that skull, I seemed to see all of a sudden, lighted up as a vast plain under a flaming sky, the problem of the nature of the criminal [… his] irresistible craving for evil for its own sake, the desire not only to extinguish life in the victim, but to mutilate the corpse, tear its flesh, and drink its blood.’ Such accounts suggest an indeterminate positioning somewhere between science (ostensible fact) and the imaginative flights of fiction, and thus can be usefully characterized, I suggest, according to a modification of Thomas Szasz’s famous phrase: here we discover not a ‘myth of mental illness’ (by which he meant a convenient lie told about those whom society finds disagreeable and seeks to control by likening them to the physically diseased), but a mythos. This word recovers the fuller application of the ancient Greek μύθος, which can refer not only to untrue stories but also to any story, speech, or plot, while also carrying with it the contemporary English meaning of a set of beliefs or ideology.”