A New Continent of Liberty: Eunomia in Native American Literature from Occom to Erdrich 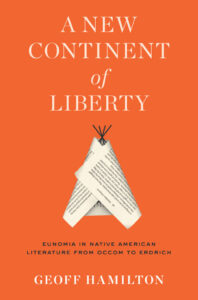 I hope to tell here another story that runs alongside, and profoundly interacts with, the one told in The Life and Undeath of Autonomy in American Literature, but which reveals an intriguingly opposite narrative trajectory. This work traces several hundred years of autonomy’s mythic revitalization in works by Native American authors, beginning with Samson Occom and extending through William Apess, Sarah Winnemucca, Zitkala-Ša, N. Scott Momaday, Louise Erdrich, and Gerald Vizenor. Looking closely at how these authors have sought to reclaim and redefine versions of autonomy, I sketch, against representative Euro-American authors, a movement of gradual, tragically-belated, but resolute ascent: from often desperate early efforts, pitted against the historical realities of genocide and cultural annihilation, to preserve any sense of self and community, toward expressions of a resurgent autonomy that affirm – in their emphasis on the self in self-rule as intimately linked to (and subordinated within) a community of other selves as well as divine presences permeating the natural world – new, Indigenous models of eunomia (“good law/pasture”).

In this, the first comprehensive study of Shteyngart’s oeuvre, I examine one of the most critically acclaimed and commercially successful contemporary American authors. I focus here on three broad, overlapping areas: Shteyngart’s construction of Russian-Jewish identity in the United States; his appraisal of communism’s imaginative legacy for the wider East European diaspora as well as the former Soviet republics themselves; and his representation of the deadening effects of late capitalism – especially in regard to the emergence of the hyper-technologized, globally-networked self and its relationship to changing notions of privacy, civility, sexual expression, literacy, and material consumption habits.

The Life and Undeath of Autonomy in American Literature (University of Virginia Press, 2014) 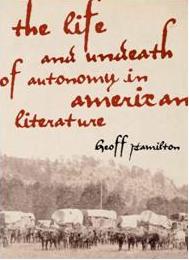 This study explores a seminal concept in terms of its deepest origins and long-term evolution. Whereas America’s ideological roots are typically examined in relation to Enlightenment Europe, I trace the origins of American autonomy (literally, ‘self-pasture/self-rule’) back to what I call the ‘eunomic fusion’ of the pastoral and political in Archaic Greek thought. I employ this heuristic framework to track conceptual changes in autonomy through its most critical stages in American literature, from the Declaration through to contemporary works. My central concern here is to demonstrate the way in which American literary representations of autonomy chart a transition in the sense of self-pasture/rule from a nourishing liberty of fulfillment under the aegis of God, through an aggressive, atomizing agency destructive to both human and natural worlds, to an ultimate feeding on the self, a hyper-autonomy or undeath, involving a spiraling inwardness and sterile isolation. 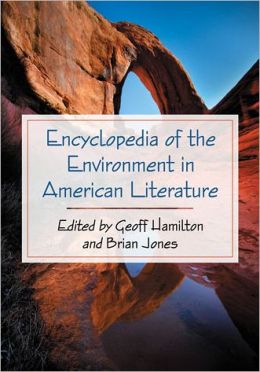 This encyclopedia introduces readers to American poetry, fiction and nonfiction with a focus on the environment (broadly defined as humanity’s natural surroundings), from the discovery of America through to the present. The work includes biographical and literary entries on material from early explorers and colonists such as Columbus, Bartolomé de Las Casas and Thomas Harriot; Native American creation myths; canonical 18th- and 19th-century works of Jefferson, Emerson, Thoreau, Whitman, Hawthorne, Twain, Dickinson and others; to more recent figures such as Jack London, Ernest Hemingway, Norman Mailer, Stanley Cavell, Rachel Carson, Jon Krakauer and Al Gore. It is meant to provide a synoptic appreciation of how the very concept of the environment has changed over the past five centuries, offering both a general introduction to the topic and a valuable resource for courses focused on environmental issues.

Encyclopedia of Contemporary Writers and Their Work (Facts on File, 2010) 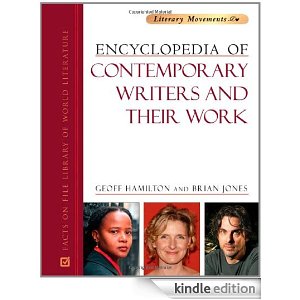 The Encyclopedia of Contemporary Writers and Their Work is an invaluable guide to English-language fiction writers born after 1959 and their best work. Coverage includes some of the most vital and appealing writers working today, such as Chang-Rae Lee, Michael Chabon, Zadie Smith, and Dave Eggers. Containing more than 200 entries written by literary scholars, this resource provides a comprehensive overview of the best writers and works of the current English-speaking literary world. 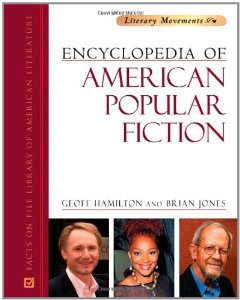 Vivid characters and first-rate storytelling are the hallmarks of good popular fiction. Encyclopedia of American Popular Fiction is an A-to-Z resource that covers those contemporary authors and works that have enjoyed commercial success in the United States but are typically neglected by more “literary” guides. Written by literary scholars, this invaluable resource provides high school and college students with everything they need to know to understand the authors and works of American popular fiction.

In response to American appeals for physicians to help in Vietnam in 1966, Dr. Hamilton, a British doctor, volunteered and was accepted. He kept a record of his experiences. His daily chronicle covers the main period of the war’s escalation of military force on all sides – American, NLF, and NVA – allowing readers to experience a vivid sense of the tragic momentum with which the war drove itself toward the Tet Offensive of late January and February 1968.